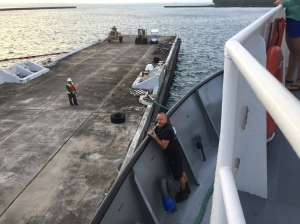 The strong winds from the early week fade away and I awake to our first still morning in what feels like weeks. Itʻs Sunday, and I feel well rested. Slowly but surely, I am arriving. We have been on the island for five weeks and even so the transition from the normalities of my life back in Hilo, to the rawness of this faraway seabird colony, does not happen overnight. In fact, it is not even a matter of days. There is a kind of letting go process that must occur, and like any release, grieving is involved. A bodily experience of death. Only then can we fully arrive on the other side. From one world to the next.
I have been so focused on this transition, giving myself the space and time needed to sink into the sands of Kure, that I have let some of my greater intentions fall away, knowing that there will be a time to pick them up again. My writing is one such intention. There is much to catch up on, much to describe, to translate into a language for the mind to grasp. To bring meaning to my internalized experience. And to share it. So with that, it is time to dive back into the journey. It is time to return to the Kahana, where our crew is preparing for arrival at Midway Atoll.

There was an error retrieving images from Instagram. An attempt will be remade in a few minutes.