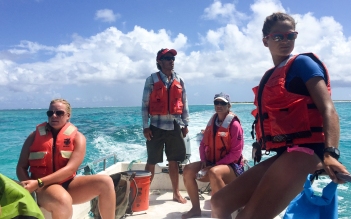 The path toward the spring of profound life is known but to a few Donʻt pluck any bloom while on this path
Or you will relinquish your focus to the indulgence of the moment For the true forms are secreted in the stones,
Where the profusion of flowers distorts
The path pointing to the sacrificial altar where life will feed the ferns Sacrificed!
[Taupōuri Tangarō]

Arrivals and departures are the beginning and ends of a cycle. They are the stopping and starting of our hearts of every moment in every lifetime. They are the ritualistic experience that we internalize and use to meaningfully understand our ancient past: to bring a ontological security to our existence. It is a chance to step out of old ways to birth new understandings. An arrival is a foundation for new forms of life to grow. The spiral of development: Like the rock for the fern, the fern for the forest, the forest for the water in the atmosphere; a sponge to bring rain and fill the aquifers as a spring for more opportunities for life to emerge. More profoundness.
But right now I feel stuck on only the flower, not respecting the path that precedes the blooming. I suppose all of this is why I feel such stricken emotions during the elapsed departure of Tiana. My mind struggles to comprehend the emotional surges I feel leading up to the known event of the Sette’s arrival and Tiana’s departure. My body mimics feeling sick. I start to lose my appetite, which is noticed by the others as I usually have the most ravenous appetite out of all of us. I blame it on too much sugar. I grow quiet and insecure. I turn inwards and isolate myself in the hallow feeing growing in my gut, trying to focus on it and bring about any understanding for myself on why the hell I’m responding so strongly to something that seems so trivial. Tiana is leaving and I liked her and now I have to deal with the void that will replace her. Another void. Another emptiness filling my shadowy desires. A moment isolated and lost. Another flower plucked along the path, disrupting a cycle, terminated the motion, severing the connection that binds life together.
I’m frustrated. So very frustrated. I’m frustrated because I want to be focused on other things. I want to focus my energy on my creative abilities, my work, on this island and its majestic qualities. But instead I’m gripping my hands into fists and gritting my teeth into regret, drifting in the severed blackness of something that never existed. That is the clarity of Hōlanikū: it brings illumination to the depth of personal struggle. It reveals the illusion of self-agency. I’m upset at myself for so easily falling into the same trap I always do, for letting it control me, for allowing it to submerge me into its shittiness. And like we too easily do as humans, not taking responsibility for putting myself in it and instead taking it out on the world and people around me through the irony of polarity.
I wait impatiently for emails from family, and I take it out on them being too absorbed in their own lives. Tiana tells me to man-up when I complain about feeling sick during our last weekend together, triggering my insecure masculinity, and I take it out on her insensitivity and lack of love for the feminine. I collapse a burrow in the field and I take it out on the Naupaka’s uncooperative twisting growth form. Virginie is bouncing proactively from one project to the next as I lay incapacitated on my bed and I take it out on her inability to relax in stillness. My frustration at myself builds and builds into a ridiculous form of loathing – a monster in my head – leaving me alone in its apparent chaos. My ego inflates into it’s own self-absorbing orb and the irony doesn’t escape me.
Instead, it causes me to run, to get away from the others so I don’t inflict my nastiness I hold within out loud to them. But even so it slips during our inevitable times together. I abruptly tell Steph, who is quite susceptible to receiving criticism, at the prewash station after dinner one night that I always observe how she finishes people’s sentences in conversations, and she immediately apologizes saying, “oh god, do I really do that? That must be so annoying!” I realize what I just did and try to remedy the situation by telling her that I don’t think it’s annoying. That, in fact, someone can’t be annoying, only annoyed, and that if I was annoyed by this it would be a problem that I have, not her. And with that I walk away, back to my bunk room, annoyed with myself for trying to hold in my problems and seeing how this only prolongs the same barriers that are holding me back in life.
Ah, the sweet metallic taste of irony holds supreme in the bile of my breached spleen.

As I continue to struggle with focusing my confusion into clarity, aligning feelings with thoughts with actions, bringing scattered energy into a singular purpose, my perseverance and faith in not giving up on myself has slowly but surely brought valuable lessons into my life. One cannot over indulge in any single moment, but rather release from such short-sightedness and expand into the peripheral plane of one moment becoming the next.
This is the realm where the wind blows from. This is the realm where our galaxy was born, where rain falls and blends with the tearful sorrows of yesterday and germinates tomorrow’s blooming disguise. Where the Albatross gather to dance. Where the Iwa chase the Koa eʻula. Where the Kawelu grass protects the Laysan ducklings. Where the mind dissolves into the body, and the body awakens to answers it receives continuously from a reproductive past permeating into a transformative future.
And as the arrival of summer represents consciousness growing and expanding outward, I look forward at all the possibilities yet to come, for all of us, as we depart from one moment and arrive at the next. As we build upon the foundation that has been set before us, always learning, always growing, always failing, always succeeding, always departing, always arriving, Oh then what great sacrifice will we make to bring forth a new dawn of existence?
E ala e!